How many times have you run into this situation:

You’ve just finished a large section of code. You launch your program in the debugger. You wait for it to start up, and then try it out a bit. But then… it crashes. Your debugger eagerly jumps up tell you there’s a problem. You look through the call stack and all the program variables, and you find something strange. A value that’s just clearly wrong. Why is it 25 and not 5? Why didn’t it remove the item from the list correctly? Why is it not sorted? You look through the code to try figure out the problem, but your conclusion is that, really, it should just be right. Your code looks fine – why did it get the wrong answer?  The only way to find out is to go back in time and breakpoint it at the point where it should have been generating the correct answer, but didn’t. So you set some breakpoints, and restart the whole program. You go through all the steps to reproduce the problem again (if you can even remember them). Finally you hit the breakpoint. You step slowly through your code, and finally find the problem. Or more likely, you find some other strange thing that may have lead to the first strange thing, and have to repeat the process. Or in haste you accidentally step over the most important line of code instead of stepping into it, and have to start again.

This used to happen to me all the time. In fact, it used to be my primary method of debugging: a binary search through the code, each time rerunning it to reproduce the problem. Wouldn’t it be easier to just step backwards through the code? The program breaks when it enters some invalid state. By the law of causality, the bug must have been in code that was before the point where the strange state occurred. Stepping forwards seems like the least useful thing you can do.

Nowadays I don’t have this problem as much, and I’ll tell you the secret: Write programs in a pure functional style. Write pure functions. That is, write functions that always return the same value if called with the same arguments, and that don’t have side effects that change the state of the system when the function is called. Write code that doesn’t mutate state.

Let me give you a real example. Recently I’ve been developing a graphics library for an embedded microcontroller. The previous graphics system was stateful: you had a mutable image buffer, and then you called different subroutines, such as drawLine, to affect a change to the pixels in the image buffer. I was tasked with creating a new graphics system – in part because we now needed to render graphics to an area many times larger than the size of all the microcontroller’s RAM.

The design I produced is almost completely stateless. For example, instead of calling a rotate function to rotate a graphic, I call a rotated function , which returns a completely new graphic object representing a rotated version of the original. Did you catch that? The word “rotate” is imperative: it commands the machine to do something. The result of what it does is known its side effect1. A function like this would probably return void, or a result code to confirm its success, and the rotation would be visible as a change in the original image.

On the other hand, the word “rotated” is, in this case, an adjective2. It describes not what the function does, but what its result is. If the argument is a picture of a dog, then the result is a rotated picture of a dog. It always will be. Every time. A rotated(dog) is always a rotated dog. The unrotated dog is still there, and still unchanged.

Then there are similar functions for creating a shifted graphic from an existing one, a composite graphic from other graphics, and a line, a polygon etc. As a quick implementation note: you may have guessed that these graphic functions can’t possibly return objects with all the pixels of the graphic they represent. The way this is resolved is with laziness – the graphic objects are only implemented as lightweight descriptions of what the resulting graphic should look like relative to their input. When it comes time to produce actual pixels, there is some short-circuiting magic that combines all the transformations into one ultra-efficient transformation, and then produces the pixels on-demand with almost no buffering required3. 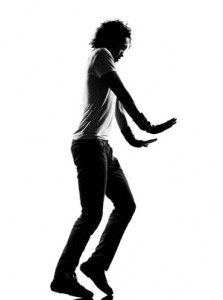 The great thing is that doing things this way plays really well with the debugger. These techniques work in other environments, but I’m specifically going to talk about my experience in Visual Studio. When your program stops at a breakpoint or exception, you can rewind the stack one frame at a time (in Visual Studio 2013 this is Shift+F11), and you can rewind within a particular frame by simply jumping directly to that line of code (“Set next statement”, or Ctrl+Shift+F10). If your program is stateful, this is sure to break something. Typically when rerunning the same code twice you might not expect it to do the same thing the second time because the conditions may have changed since the first time it, and so the program may be in a different state, and thus produce different results. This isn’t a problem at all if you use immutable data structures and your functions have no state or side effects. Now you can step backwards!

In addition to being able to step backwards, you can also evaluate arbitrary expressions in the debugger. For example, I have a function like saveGraphic(graphic, filename), which takes a graphic and saves it to a bitmap file. This is technically not a side-effect-free function since it writes to file, but for the purposes of debugging it has no side-effect which modify the state of the program in any observable way, and so is “pure” for practical purposes. In Visual  Studio, I can add a watch expression like saveGraphic(dog, "debug.bmp"), and the debugger will happily execute the function. Now I can see the value of my immutable graphic object! Since rendering doesn’t mutate program state, I can use “pure” functions like this to visualize any complex objects. I can even evaluate transformation functions in the watch window, such as saveGraphic(rotated(dog), "debug.bmp"), knowing confidently that my program state hasn’t changed as a result of evaluating the watch.

I hope you enjoyed this post, and learned something new that will help you with your bug battles, and challenge the way you think about coding.

One Reply to “Moonwalk debugging”