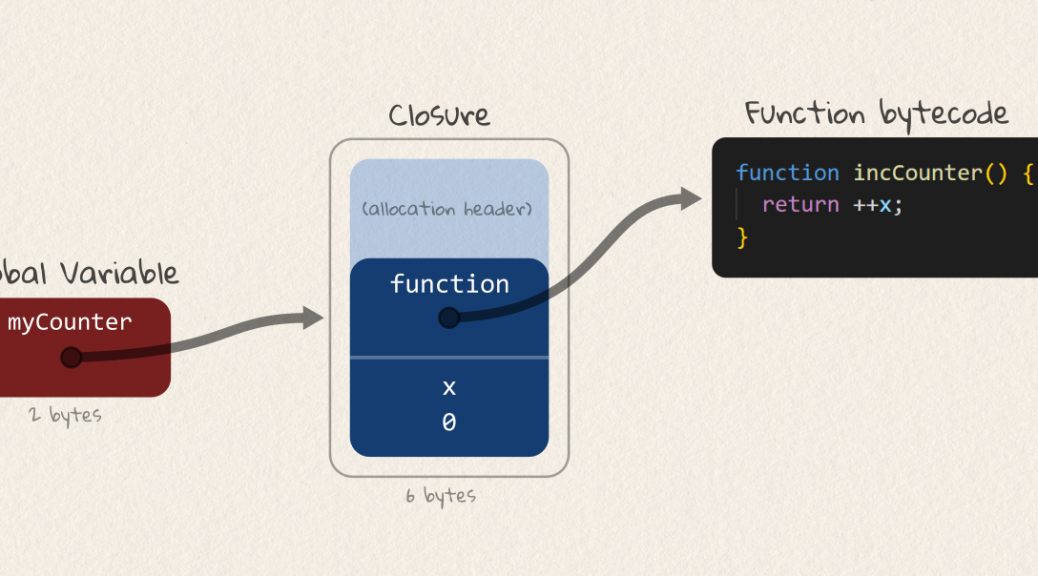 TL;DR: Microvium closures are now as small as 6 bytes on the heap, down from 12 bytes previously and compared to over 100 B in some other engines.

Microvium is all about squeezing things into tiny spaces, and the latest of these is closures — the memory structure used to carry the state of nested functions. If you’re new to closures, have a look at my previous post which explains closures from a C programmer’s perspective.

One of my goals with Microvium has been to make it feasible and realistic to run JavaScript on really tiny devices. More than half of the microcontrollers selling on Digikey have less than 16kB of RAM and 128kB of flash. When you’re working with devices this small, you count every byte you use.

People typically program these kinds of devices in C. However, as I’ve shown before, there can be some real, practical benefits to using a language like JavaScript in these situations. For example, JavaScript-style single-threading can be more memory-efficient than multithreading, and using a garbage collector like Microvium’s can avoid heap fragmentation overhead and help to reduce the memory leaks associated with manually freeing memory. And of course, your code may be less complicated when working in a higher-level language, which itself can mean less development time and fewer bugs.

When you’re working with such small memory spaces, what kind of size would you consider to be acceptable for a closure function, like the myCounter in the following example?

As I demonstrated in my previous post, if you code up something like this in C, it might take 20 bytes of memory1, ignoring fragmentation overhead. So what kind of size would be acceptable to get the convenience of the JavaScript syntax? Maybe 30 bytes? 50 bytes?

Other JavaScript engines that I’ve measured take over 100 bytes for a closure like this! (See here for my measurement methodology and feel free to correct it). That’s not a fault of the engine, it’s a product of the JavaScript spec which requires that all functions are objects. For function declarations (functions declared using function rather than arrow syntax), not only is the function an object, but it also has a fresh prototype object in case you use the function with new.

That’s a heavy price to pay! Maybe that’s ok on a desktop-class machine. But when you’re working on a device with tens of kilobytes of memory, that’s just not an affordable feature anymore. So, in Microvium, closures are stripped down to their bare minimum. Functions in Microvium are not objects — they cannot have properties. And in return for this trade-off, Microvium closures can be really tiny: the closure in the above example is just 8 bytes! (Including a 2-byte reference and 2-byte allocation header).

Another reason why this is so small in Microvium is its 16-bit slot size. It stores all pointers as 16-bit, even on a 32-bit machine. Numbers, such as x in the example, start out as 16-bit but grow as needed. This is great for things like counters which are likely to be small most of the time but which are able to count up to 253 without overflowing. This is in contrast to C where you typically need to use memory upfront for the largest-possible value that a variable might have.