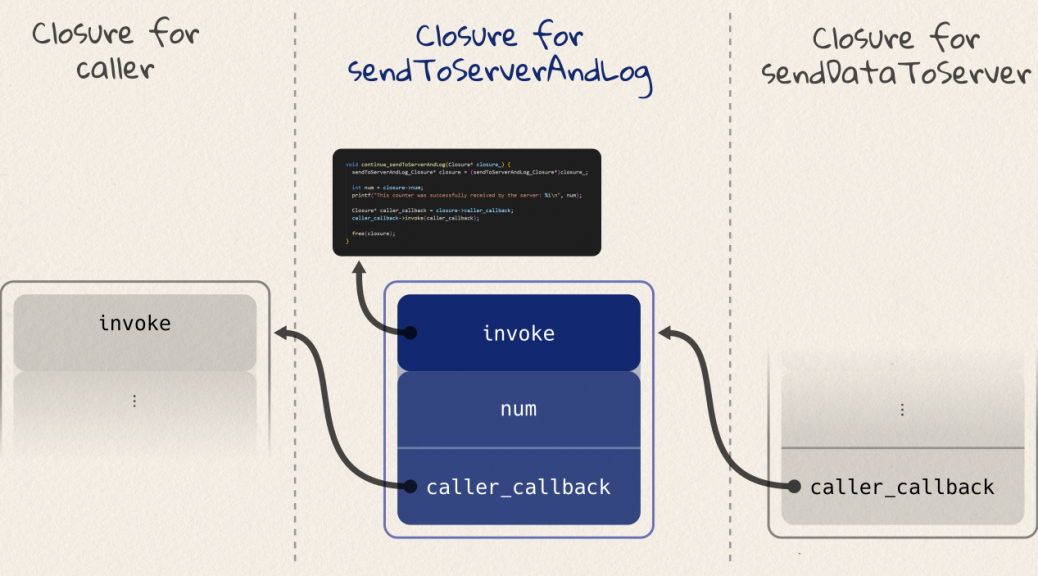 TL;DR: Closures are a good way to represent callbacks for non-blocking code. Although C doesn’t support closures, you can achieve something similar using structs on the heap, but you can get even better memory efficiency by using JavaScript running on Microvium.

I’ve recently made some improvements to the memory usage of closures in Microvium, which I’ll talk about in more detail in an upcoming post. But before I get there, I want to first talk about how a similar problem can be solved in C, as a point of comparison.

In this post, we’ll look at a scenario where closures are useful, starting with the most basic solution to the problem in C and then progressively improving the design to address its weaknesses until we end up with something closure-like, which I will then contrast with the same solution in JavaScript. This post is aimed at people who are more familiar with C than with JavaScript, and are not necessarily familiar with closures.

Let’s start by imagining that we have a C program that needs to perform some slow, I/O-bound operation, such as sending data to a server. For simplicity, let’s assume that we just need to send a single integer, and let’s assume that someone has given us a library that does exactly this:

And let’s say that we have a requirement to log once the payload was sent:

So here I’ve constructed an example where the value of num, which is available before we contact the server, is also used after we get a response from the server. I’ve simplified the example by ignoring failure cases. This is a special case of a common situation where some program state needs to be preserved across long-lived operations, such as a state machine or retry counter.

A problem with the above solution is that it blocks the thread. In terms of memory usage, we can think of it as requiring the memory of a whole call stack, which may occupy anything from hundreds of bytes to megabytes, depending on the system we’re running. And more importantly, we can’t use the thread for anything else while it’s blocked.

To avoid blocking the thread, we could instead consider using a callback function. Imagine that our hypothetical library supported this by taking a callback argument, rather than blocking until completion:

Now we can write our application code like the following, where we’ve split the behavior of sendToServerAndLog into two parts — one part before sending the data and one that’s the continuation after we’ve received a response:

In order to have the state of num available in the callback, we needed to persist it somewhere, so we need the save_num variable. This solution is much more memory efficient that the previous — if we’re running on a 32-bit platform, our app code occupies only the 4 bytes of save_num. The library code now also needs to preserve the callback pointer across the call, which uses an additional 4 bytes of memory. So this solution takes a total of 8 bytes of memory during the server operation, compared to using a whole thread and call stack of memory before. But there are still two issues with this design:

A common pattern to get around the above problem is to have the library code accept an additional parameter that it passes back to our callback, which here we might name “context” because it represents the contextual information of the particular caller:

Now, if we call sendToServerAndLog multiple times, each call creates a distinct context that is completely independent of any other call.

Side note: Why make the context a void* instead of just an int, since we only need an int here? The reason is that we’re imagining here that sendDataToServer is part of a reusable library. Even if it’s a first-party library, it’s generally better practice to write it in such a way that it’s decoupled from the particular way you use the library. Making it a void* allows the user of the library to decide the size and shape of the preserved state, rather than coupling it to the library itself.

This is the same reason why we use a function pointer at all, rather than just hardcoding the library to invoke our particular callback directly: the library should not be coupled to the particular function that executes after it. And as the program evolves, we might land up calling it from multiple places that each require a different callback.

Applying the same pattern to sendToServerAndLog

If we’re working with highly coupled code, then maybe we already know whether or not the caller of sendToServerAndLog needs to do anything else afterward, and exactly what it needs to do. But if we want sendToServerAndLog to be a reusable code that is decoupled from its caller, then we should probably have it accept its own callback and context from its caller. If we do this, then we need to persist the caller’s callback and context until the whole operation completes, so let’s upgrade our context to a struct that includes these fields:

Stylistically, it’s interesting to consider one further modification to this example. You may or may not agree with the following design change, but it leads nicely into the topic of closures in Microvium, which I’ll get to in a moment.

This final design is quite clean:

But there are some disadvantages to this design:

We can write this same example in JavaScript using nested functions, as follows:

The nested function continue_sendToServerAndLog has access to variables in the outer function (in this case the parameters num and caller_callback). Here I tried to keep the function names consistent with the C example, but in practice, it may be more convenient to do the same thing using arrow function syntax, as follows:

Either way, the values num and caller_callback are automatically captured into a closure on the JavaScript heap, making them available to the nested function automatically.

If you’re using the Microvium JavaScript engine, this created closure has a very similar structure in memory to the final example we did in C — it’s a single structure with a function pointer and two other variables. You may see now why I called the struct in the earlier C example a “closure”. The C code is a more explicit way of representing the same runtime structure, with similar benefits from a decoupling and modularity perspective, although clearly the JavaScript is more syntactically simple.

This closure heap allocation in Microvium will have the following characteristics:

We’ve walked through an example that’s representative of a common situation in program development, especially when networking is involved: network requests take time, and we can either block the current thread or we need another way to remember what we were doing so we can get back to it when the request completes. When writing your code in a modular and decoupled way, it’s better not to assume anything about the caller of your long-running application, so it’s better not to block the thread or hard-code anything about which callback to run or what state to hold onto.

In this case, Microvium actually offers you a way to make your code more memory efficient than the equivalent C code, while also making it easier to follow, and preserving the nice decoupling characteristics. Depending on your situation, this might make Microvium a good choice for orchestrating this kind of high-level program flow, especially when long-running tasks are involved and when you need to keep track of state across those tasks.