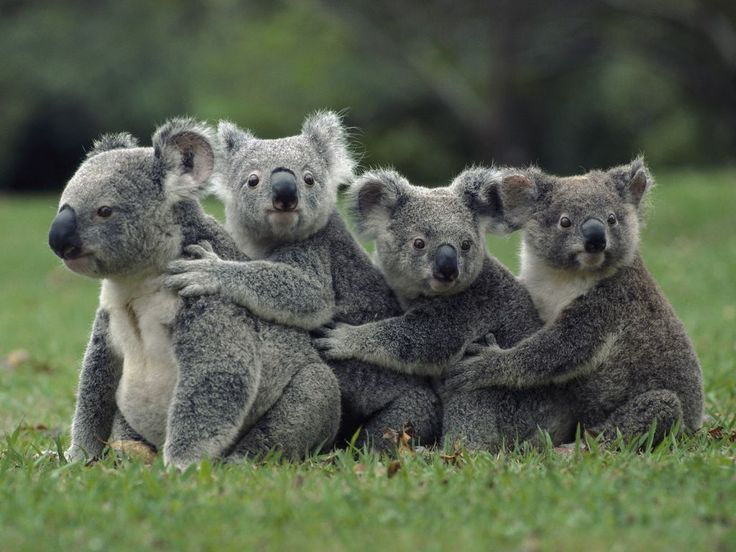 I’m taking a bit longer than usual to write up new blog posts recently since I’m in the process of moving from San Diego to Melbourne, Australia. Hence the photo of the linked-list sequence of Koalas above1. Things should get back to normal in a couple of posts from now, and I’ll let you know how the move goes!

But enough about my life – you’re here because software is awesome! And together we’re exploring the best ways of working with sequences. Today we’re going to try to write a function2 that decodes UTF-8, without using the heap, and keeping the input “shape” the same as the output shape, so that multiple similar functions can be stacked together (something I touched on at the end of the previous post).

Let me quickly try to describe what I mean having the input “shape” match the the output. I’ll take last week’s example of having a “decompress” function which feeds bytes into our beloved “decodeUtf8” function, which feeds characters into a “parse” function. Often what we land up with something like the following situation:

That is, the “stack” of functions doesn’t fit together on it’s own. One function wants to push data to the next function (it wants to be in control), while the next function wants to pull from the previous (it wants to be in control instead). What we land up needing is something in between each layer of the stack. Something that doesn’t mind being pushed to and pulled from. Something doesn’t doesn’t take any control. This is normally a container, such as a list or buffer:

Each of our two attempts so far has manifested this problem slightly differently. In our first attempt, the function pulled bytes from an array, and pushed the resulting characters to an array. In that case the buffer was built into the function itself, so this push-pull conflict was absorbed, but its memory inefficiencies and lack of asynchrony were still an issue.

Our second attempt could be said to have rightfully had a “pull-pull” shape – as we want – since it pulled out of the input array, and the caller pulled characters from it one-at-a-time by calling it. The shape mismatch in that case was simply that the caller was forced to provide an array input, while the output was definitely not array. What was the output exactly?

This takes us into the land of iterators.

This code assumes that we have some function “init_decodeUtf8” that gives you the initial cursor state for some document. Notice that our code here doesn’t interact directly with the value of the cursor state, it only interacts with the functions init_decodeUtf8 and decodeUtf8_attempt2. This is intentional, and is done to encapsulate the state of the cursor. That is to say, the state of the cursor is managed only by those two functions, which limits the number of places in the code you need to consider when you think “what state can the cursor be in?”. Although in this case the encapsulation is manually enforced (we have to just “know” not to interact with the cursor state outside those two functions), if we upgrade our example to C++ we can get the compiler to enforce the encapsulation and data hiding:

This C++ class has a public interface (aka “surface area”) that exposes two functions: the constructor to initialize the object state, and a “next” function to progress the state to the next element and retrieve that element. The class encapsulates the state of the cursor, and prevents clients of the class from accidentally modifying the cursor.3

This class is an iterator. It provides a way for users of the function/class to iterate through the output sequence of characters. I would say that we haven’t made it into an iterator by making the class, but that we’ve just revealed the true nature of the original decodeUtf8_attempt2 function: it always was an iterator.

For those who are familiar with C++, you’ll probably notice the similarity between the Utf8Decoder class and a standard C++ input iterator.

So, we said that we wanted to try get the input and output “shapes” to be the same. Since we’ve now said that the output surface area is an iterator, we can be more specific and say that we want the input to also be accessed via an iterator, rather than directly passing it a whole array of input bytes.

This is actually quite a challenging problem, and I’m going to first choose C# as my tool of choice to represent the solution:

This is perhaps the most elegant solution we’ve encountered so far. It’s the most direct representation of the original problem statement, and works entirely using iterators. The input and output are the same “shape”, and it would be very easy to pipe the result of one function into another that accepts a sequence of that type.

Now let’s also take a look at how we might do this in C. What we want to do is abstract the input to decodeUtf8 function, so that while the input could be an array, but it could also be another iterator. We also want this function itself to be an iterator of the same shape. What about this:

This is quite awful, and requires some explanation. Firstly, the decodeUtf8_attempt3 looks very much the same as it did in attempt 2. This new decodeUtf8 function is expected to yield a new character every time it’s called, the same as before. The significant difference is that now the cursor state isn’t statically typed (it just uses void* to represent “any type”), and that it holds some sort of abstracted state (the input_state field). State does have a runtime type, and for this to work the state must be of type decodeUtf8_state. Why is it typed void if it must be decodeUtf8_state? It’s because the caller of decodeUtf8_attemp3 doesn’t know that it’s calling this specific function, but instead could be calling any function that produces characters while maintaining state.

This is quite awful, and if it doesn’t make complete sense to you, don’t worry. The point is that it gets incredibly difficult to write code in C that has abstract dependencies. Not only is the abstraction apparent at runtime, since every byte needs to be read through an indirection function call accessing indirect state data, but it’s also just less readable and really hard to get right.

C++ is only marginally better. It provides standard containers with iterators, but this doesn’t solve the problem of chaining functions together since most functions that act on sequences must pull from an input iterator and push to an output iterator. Most often you then need to have a container as a buffer to be able to “fit” these functions together. This can be good, but if you’re operating under tight memory constraints or dealing with asynchronous data then this typical approach can be a problem4.

C# provided a much better solution to the eye, although at runtime there are many similarities between our C implementation and the C# one. For example, both will be using indirect function calls, and both provide a level of runtime abstraction.

We may have run out of options on this one. The languages have just let us down. There seems to be no way to get the efficiency, abstraction, and syntactic simplicity in the same package.

But that’s not the end of our journey. This pull-pull pattern is only one answer to dealing with sequences. Next time, we’ll turn the problem on its head and consider how to deal with sequences that are asynchronous. That is, sequences where you can’t pull data from the source, but instead the source pushes data to your function. For example, when you’re processing data from a network stream, you don’t want to have to wait for all the data to be present before starting to operate on it.